Here are photos from yesterday’s Border Angels desert water drop. “Since 1994, more than 11,000 sons and daughters, sisters and brothers, husbands and wives have died from dehydration in their attempt to across our increasingly militarized border. Our water helps reduce the 500+ deaths every year.”

These water drops save lives and bring attention to this humanitarian crisis.

These experiences allow me to reaffirm my role and purpose in how I serve as well as provide deeper conviction for my solidarity and work in education and social justice. Each time I participate in a water drop, I have the opportunity to hear new stories of the courageous and tragic plight of so many immigrants. Each story is different, but they all represent the unwavering human spirit of survival, strength, hope, and the determination and perseverance to obtain a better life.

On this most recent experience I had the honor to meet a father and son who were experiencing the desert water drop for the first time. The father, Luis, crossed through difficult border terrain six times with his mother starting from the early age of six. Desperate for access to quality health care and for a second chance for her son’s life, his mother decided to make the treacherous journey with Luis and her 18 year old son suffering form leukemia. The doctors in Mexico had given her son a month to live. Under the care of a compassionate and determined doctor from the UCLA Medical Center, her 18 year old son went on to live 16 more years.

Luis recalls walking all night with his mother and brother in the silent, darkness of the night; the only sound was the crumbling of the earth under their feet and the sound of their breath puncturing the suffocating stillness. He wasn’t scared, his mother told him everything would be okay, and he felt safe with her. It isn’t until now that he can recognize the extraordinary feat his mother was leading and how vulnerable his safety was on those treks.

Besides blistering heat, temperatures soaring as high as 110 degrees, and burning cold, temperatures falling as low as 20 degrees, migrants must also contend with dangerous creatures that roam this unforgiving and untamed borderland such as the Western Diamondback Rattlesnake, the Arizona Bark Scorpion, and the Brown Recluse Spider, on of the most venomous creatures in the area. These creatures hid under rocks and shrubs where migrants hide from both the border patrol and the sun. The death of many of these migrants is not a painless death. Dying from exposure to the elements can be brutally elongated process. 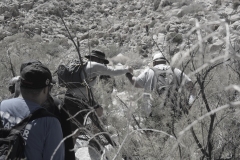 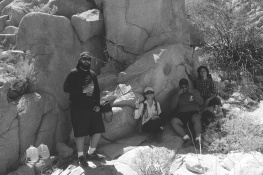 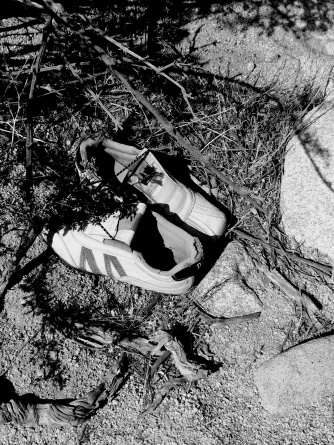 In his award-winning book, “The Devil’s Highway,” Luis Alberto Urrea describes the stages of heatstroke in painstaking detail. “Those in shape will, sooner or later, faint. This is the brain’s way of stopping the machine, like hitting the brakes when you realize you’re speeding towards a cliff.” Initially heat cramps will develop primarily in the legs and abdomen area, followed by heat exhaustion, usually manifested by dizziness, blurred vision, head aches. Once heat stroke sets in, one will begin to experience fatigue, nausea, and vomiting. “By the last stage of heatstroke, hallucinations occur, and the body’s nerves are aflame” leading to convulsions and eventually unconsciousness. “You are having a core meltdown, “Urrea explains. “Your temperature redlines – you hit 106, 107, 108 degrees. Your body panics and dilates all blood capillaries near the surface, hoping to flood your skin with blood to cool it off. You blush. Your eyes turn red: blood vessels burst, and later, the tissue of the whites literally cooks until it goes pink, then a well-done crimsom.”

Maybe more difficult than the dangers faced in the desert, is the separation of family. Luis’ father was a migrant farmworker who left his homeland to work in the fields of the United States when Luis was too little to remember. Unlike his older siblings, Luis has very little memories of his father, who spent most of Luis’ life working in the fields. It was a beautiful sight to see the juxtaposition between Luis’ experience with his father and his relationship with his son, Ricardo. Luis told me he had been wanting to get involved in this type of volunteer work for a while now, but was hesitant because of the wounds it would open, so when his son told him he wanted to do this as part of his community service project for school, Luis realized that in order to support his son, he would have to confront his pain. In seeing their relationship, there was no doubt in my mind that when we listen and follow our hearts, our children come to help us heal and teach us profound lessons.

There is absolutely nothing I wouldn’t sacrifice for my daughter. There is nothing immigrants are doing when they come through the desert and traverse that border that I wouldn’t do in their circumstances to give my daughter and family a better life. We have a humanitarian crisis in our backyard and we need to join in solidarity with our migrant brother and sisters.

The story of immigration doesn’t just start with the deemed illegal crossing of thousands of people looking for a better life. If you want to understand the problem of immigration, you need to understand who profits from it, not just who suffers. Forced immigration begins with trade agreements, demand for cheap labor, privatization of natural resources, land-grabbing, maquiladoras (sweatshops) run by multi-nationals, the war on drugs, and mafias like the IMF International Monetary Fund creating debt greater than the moral responsibility we have to people’s well-being. You see, this is the very definition of structural violence – the erasure of parts of history in order to criminalize the victims of exploitation and dehumanization. It is through the work of organizations like the Border Angels that we bring light to the narratives that are erased, and begin to humanize the people that have become invisible.

Dehumanization creates hate. Vigilante groups and some border patrol agents have been known to slash the water jugs left for the migrants.  Nineteen slashed water jugs were counted between the volunteers yesterday.  For every slashed jug, five more were left in its place.  As Jonathan, one of the volunteer coordinators for Border Angels stated in similar words, we can only fight death by saving a life.  “Be a sweet melody in the great orchestration, instead of a discordant note. The medicine this sick world needs is love. Hatred must be replaced by love, and fear by faith that love will prevail.” – Peace Pilgrim.