I could smell the stench from the stale alcohol diluted with dreams pissed away by shattered hopes like the broken malt liquor bottles in the alley that separated our apartment complex from the Green Cat Liquors store, standing on one of the Four Corners of Death.  In the background, I could hear the screeching and honking of cars sometimes competing against the noise of booming music.  The muddy brown apartments stood there drunken with screams and reproaches of could be’s and could’ve been’s.  Mamá and I had just returned from the Laundromat.  I was standing next to her as she opened the trunk of her car to grab the basket of clothes.  A shadow approached her from behind pointing a gun at her.  He demanded she give him her purse.  I could see the look of resistance in Mamá’s eyes, the same look I had seen in my grandmother when she was confronted with abuse and injustice.  Mamá held her purse tightly like the five-dollar bill that got us through the end of the month.  When she refused to let go, he elevated the gun, pointing it right at her forehead, and cocked it making the sound of a ticking clock. I knew that if she didn’t release the purse, he might hurt her.  I stepped in between him and mamá and facing him, his eyes, I matter-of-factly said, “Dale la bolsa mamá.”  The three of us stood there suspended in time, crossing paths like the cracks on the oil-stained pavement.  She had no choice but to let go.  As he yanked mamá’s purse and began to run, she gave it one last tug.  I grabbed her arm as if to remind her that it was okay to let go.  We stood there in silence listening to the rattling nickels and pennies that had escaped from the purse.

At the time of the incident, there was not a black gate surrounding the perimeter of the apartment complex. 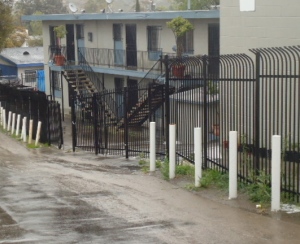