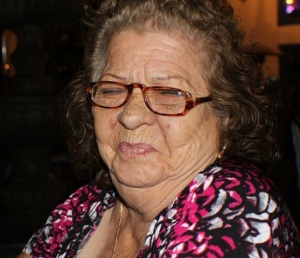 I dedicate this poem to my grandmother, Carmen Elida Prince (Tita), and all the Abuelas who have had the courage and resolve to fight for the happiness of their family.   She taught me to never allow boundaries to limit my dreams.  She was courageous, and even when fear overwhelmed her, she always followed her heart.  She had dreams for her family, though she rarely dreamed for herself.

She was a paradox.  Abused by both of her husbands, she struggled to find her voice  to stand up for herself.  Too afraid of her first husband, mi abuelo Don Luis Covarrubias, she let the love of her life, Miguel Angel, slip away.  Yet, when her husband’s abuse threatened her children, she emerged on her own power and, without a penny to her name, went in search of a better life.

She was kind, gentle, and generous, yet vicious and fierce when it came to protecting someone she loved.  She was about 18 and had already married her first husband.  My abuelo had given Tita money to buy a cashmere sweater she had seen and liked.  Her younger brother, tio Miguel, accompanied her to the department store.  She was delighted with her sweater.  According to tio Miguel, on the way back home, they came upon a woman that was sitting on the sidewalk with a baby in her arms.  It was a cool evening, and Tita noticed that they were not wearing anything warm.  Without hesitation, she grabbed the cashmere sweater and handed it to the woman, along with money.  My uncle stared at Tita incredulously, thinking my abuelo was going to get very upset when he found out that Tita had given the expensive sweater away.

On another occasion, Tita had gone out to the Mercado with her sister, my tia Mary.  They had gone to purchase a can of sardines.  As they were walking back home, a passerby grabbed my tia Mary’s butt.  All of a sudden, Tita heard my tia yell, “Cabron, hijo de la chingada!” In seconds, Tita got wind of what the jerk had done, and without anticipation, jabbed the open can of sardines into the side of his face and proceeded to scrape the can with the jagged edges down his face.

Within the confinements of her life, she found the freedom to be.  She didn’t take shit from anyone, and yet she took a lot of shit.  She was abused, silenced, and overpowered, yet she was resilient, loud, and powerful.  No matter how difficult her life experiences, she never succumbed her spirit to the suffering.

The more she aged, the more youthful and vivacious she became.  She always wore bright, bold colors with matching jewelry.  She never missed her routine pedicure and manicure, and she wasn’t afraid of reds and fuchsias.  Her eyebrows were tattooed, and even though they could only merit the label of peach fuzz, she insisted she get them waxed every two weeks.  She loved to eat but had cooked enough in her lifetime, so she was always insisting we go out.

As she became older, her spirit was no longer buried under the mud of oppression, abuse, guilt, and expectations.  I saw her transform into who she was meant to be.   For all of this and more, she inspired me to find mi alma de colibri.

Boldly dancing against the still azure

Wings of kaleidoscope whispering hope into the air

untamed dreams manifested in every

It can never survive in a cage, its wings would suffocate

Emerging entirely on its own power

It colors the soul of spring

One thought on “The Soul of a Hummingbird”